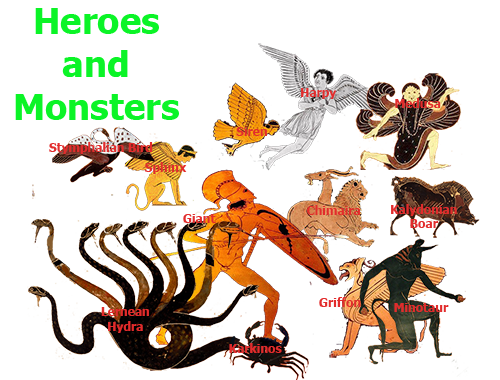 Lerne is a swamp in Argolis. It is said that there lies one of the gateways to the underworld. A Hydra nested on this swamp and would come out of it to feed on the livestock of the surrounding valleys. This caused villages to be abandoned and a feeling of insecurity among the citizenry. King Eurytheus of North Argolis (Tiryns and Mycenae were his strongholds) tasked Hercules with defeating the Hydra. The Hydra had 1 immortal and 8 mortal heads. Hercules, cut off the Hydra's heads but 2 would emerge as soon as 1 was cutt off. He then employed Iolaos his nephew and charioteer. Hercules cut off the heads with powerful strikes from his club, and Iolaos burned the wound in Hydra's body to stop it from growing back. He then strangled the immortal head into unconciousness, cut it off and buried it under a huge stone. I hope no-one would lift this stone... Wait... I did: Heroes and Monsters!

Karkinos was a huge crab. Hera sent it to bite Hercules's feet while he was fighting with the Lernean Hydra. Hercules   employed the aid of Iolaos, his nephew and charioteer to overcome those beasts.

Lake Stymphalos is a swampy lake located in the highlands between Arcadia and Corinthia. Ares, the god of war and bloodshed nourished them to become menacing beasts. They had bronze beaks and they could penetrate armour and shields. After they caused much devastation to the farmers of Stymphalia, Hercules managed to defeat them. He either slayed them with arrows dipped in Hydra's blood, or he used the krotala, a pair of brazen castanets given to him by Athena the goddess of wisedom, war and strategy. The krotala were crafter by Hephaistos, the god of smithing and volcanoes.

King Oineus was a devotee to Dionysos, god of wine and celebration. During the yearly sacrifice, possibly in a rush to start drinking wine, Oineus of Kalydon forgot to sacrifice to Artemis. Thus she sent a huge and powerful boar to devastate his lands and harass his people. After a long hunt, this boar was slain by Atalanta and Meleager.

In a small island near Sicily, dwelt the treacherous sirens. They sung with melodic voices promising relaxation and company to sailors of the passing vessels. This would enchant the sailors into jumping overboard to reach the island and meet the sirens. The island was unreachable and the eager seamen would drown. The only person to have ever met them and lived to tell the tale was Odysseus, King of Ithaca, and builder of the Trojan Horse.

Gorgon was a beautiful girl which suffered a terrible fate. Poseidon, the blue-haired god of the sea and horses raped her inside a sacred temple of Athena. Athena then decided to transform her into a menacing beast with a powerful stare, capable of petrifying all that dared look upon her eyes. King Polydektes of Seriphos sent the hero Perseus after this monstrous being, hoping it would lead to his demise. Perseus, assisted by Athena used a Chalkaspis, a brazen shield. He entered Medusa's lair with caution and when he say her idol mirrored on his shiny shield, he beheaded the monster with a single strike of his sword. Later he gave the head to Athena and she used it to decorate her shield.

Apollo, the god of music, culture, oracular arts and the sun departed from his main sanctuary in Delphoi every year for a short period of time, which he spent on vacation among the Hyperboreans (the people beyond the north). He did embark on his journey with style, ridding his Griffon. The Hyperboreans were known to be rich and peaceful and very few mortals claimed to have met them. On the edge of their world lived the Amarispians, a tribe of one-eyed wannabe-thiefs. The Amarispians battled with Griffons regularly because Apollo and the Hyperboreans would use these ferocious creatures to guard their stockpiles of wealth and their treasuries of gold.

Queen Pasiphae was the wife of the famous King Minos of Crete. Even if she had many children with her husband, she was always in the mood of copulating, engaging even in bestiality. Poseidon provided Minos with a great Bull, a creature worthy of a great King. Pasiphae asked Daidalos, the architect of the Labyrinth of Knossos and the mechanical robot-warrior Talos, to create a hollowed-out cow body. She used this body to have sexual intercourse with the Bull of Poseidon. This led to the creation of the Minotaur, an anthropomorphic bull-headed monstrosity. King Minos trapped this beast in the Labyrinth of Daidalos, and he fed it with alive captives arriving to Crete from Athens. One day, Theseus, a son of Poseidon and the heir of his step-father, King Aigeus of Athens came to Crete and slayed the beast with the help of Ariadne and Daidalos.

The chimaira, like the Hydra and the Nemean Lion was a spawn of the Titans (Typhon and Echidna). She dwelt in northern Lycia, devastating the land and devouring herds and people alike. King Iobates of Lycia employed the help of Bellerophon, a Corinthian youth in exile. Bellerophon has as his horse Pegasos, the winged horse. The Chimaira was a strong opponent and she could breath fire. Bellerophon slayed it using either his spear or his arrows.

The giants were spawns of various Titans which possessed immense strength, speed and stamina. Some of them were slain by the Olympian gods, yet some escaped. Many became kings or landowners and they usually guarded spoils or herds. Ancient Greek heroes had to trick or mislead the giants or stealth-kill them to progress with specific quests, tasks, labours or missions.

King Phineus was a wealthy King of Thrace, but he blinded his own sons to receive the gift of prophecy. Although he became a seer of great abilities, Zeus became angry with his mistreatment of his own children and sent the harpies to torment him. According to legends, the winged harpies would chase the King around the globe, haunting him and disrupting his peace of mind. In another legend they would simply steal away everything on his rich banquet-table, making suffer as he could not enjoy the fruits of his labour, making him struggle for nothing. The harpies were finally dealt by the Argonauts.

Get Heroes and Monsters

Add Heroes And Monsters To Collection